Home People Aliko Dangote’s Wife: Things You Did Not Know About Her

All You Need To Know About Dangote’s Wife. 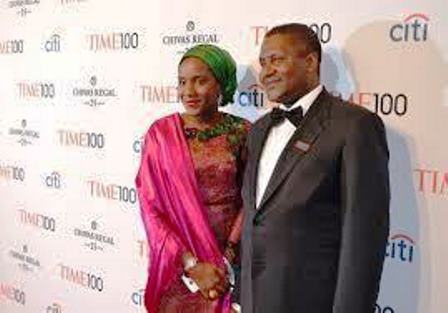 So much has been seen, heard and written about Aliko Dangote, but there’s little information about his wife, if there’s any information at all, it is negligible.

Be informed that Aliko Dangote has been married at least three times already. His first two marriages ended in divorce.

He did not even choose his first wife as she was selected for him in 1977 when he was 20 years old.

In subsequent years, he later fell in love with Nafisat Yar’adua the daughter of the late President, Umaru Musa Yar’adua GCFR. Nafisat declined his marriage proposal because she was friends with Dangote’s daughter.

Nafisat later married Alhaji Isa Yuguda, the Executive Governor of Bauchi State and became his fourth wife at the age of 21 in 2009.

Dangote later married Mariya A D Muhammad Rufai, daughter of The Commissioner for Women Affairs and Human Services in Buchi state but their martial bliss did not also last long as it ended up in divorce too.

Presently, no one knows who his current wife is. There were rumours here and there that he got married to one Sylvia Nduka, who is an ex-beauty queen.

Who is Aliko Dangote wife presently?

As at present, it cannot be ascertained who Dangote’s wife is. One can even call him a bachelor; that will make him one of the oldest richest bachelors living. Dangote is presently without a wife.