The Names of all Aliko Dangote’s Children

In one of our previous post, we talked about Aliko Dangote wife and his biography and current net worth as the current richest man in Africa. This time, we are going to talk about the names of all Dangote’s children, even though he is at present, a bachelor. 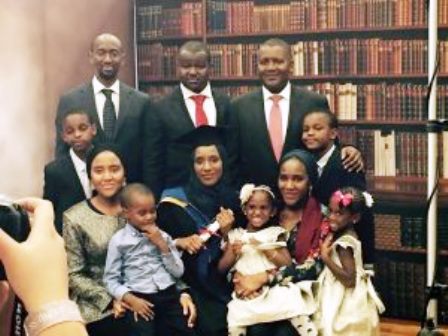 You might want to know why Africa’s wealthiest business man is still a bachelor? Well, Aliko Dangote has been married twice and all ended in divorce. So if you are asking how many wives Dangote has, know that he is still single and not a polygamous person as most people might think.

There are rumuors filtering that he was in a relationship with Sylvia Nduka, a beauty queen in Nigeria (most beautiful girl in Nigeria). However, it was revealed that the romance ended after Aliko Dangote was said to have divorced her based on allegation that she revealed secrets about him.

Africa’s wealthiest man was born on January 10, 1957 in Kano. his full name and national title is Alhaji Aliko Dangote, GCON, and he is the Chief Executive Officer of The Dangote Group, a multi-billion conglomerate in Africa that contributes to the various industries and sectors in Nigeria.

The success story of Dangote’s business has seen him spread his venture to other African countries such as Benin Republic, Ghana, Togo, Cameroon, Tanzania, South Africa and Zambia. As seen on an interview, he recalled how he bought cartons of sweets and a younger age and sold them in his primary school time just to make money.

Although, Dangote was born with a silver spoon as he came from a very wealthy family, he still pursued his drem of becoming an entrepreneur. His uncle, Alhaji Alhassan Dantata was recorded in history as the richest man in Africa when he was alive.

Forbes ranked Dangote’s worth in 2008 to be estimated at US$3.3 billion and he was the first in Nigeria in Forbes Magazine’s list of world’s richest people from Nigeria to enter that list. Fast forward 10 years later, his net worth is now $15.3 billion.

It might even shock you to know that Forbes 2017 rankings proves that Dangote is richer than US President, Donald Trump and some other prominent billionaires you might know in the world.

Aliko Dangote has interest in importing, manufacturing, exporting, real estate, oil and philanthropy. Some even say he is more powerful than the Nigerian president as he dictates the direction of the economy of the country since he has monopoly over majority of the country source of revenue.

Just to mention a few products of Dangote’s group ranging from sugar, salt, flour, spaghetti, noodles, cement, fruit juice, fabrics and so on. His products have become a house hold name in the country.

Dangote first began his business in Kano and it was his maternal grandfather, Alhaji Sanusi Dantata who gave him the capital to start up. Alhaji Aliko Dangote later moved to Lagos in 1977, excelling in cement trading and other commodities.

Today, he is the biggest employer of labour in Africa and Alhaji Aliko Dangote’s children are also among his Board of Directors in his companies.

The names of Dangote’s three daughters are Mariya Dangote, Fatima Dangote and Halima Dangote. They studied in the United Kingdom. Mariya is the first followed by Halima and Fatima respectively. They also have stake in their father’s companies and businesses.

Apart from his three daughters, Dangote has a heir to his investments and fortunes. Although, this son of his was however adopted and do not bear Dangote’s name. The name of the adopted son of Dangote is Abdulrahman Fasasi. To know more about his son see here 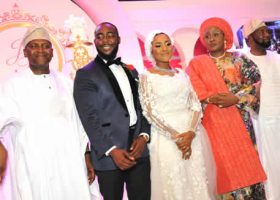 According to reports, Africa’s richest man and father of the bride, Aliko Dangote promised to make the occasion a high profile ceremony.

The name of Fatima Dangote husband is Jamil Abubakar. Top dignitaries like world’s richest man, Bill Gates, about five presidents in the world and all the past presidents of Nigeria attended the wedding. The venue of the occasion was held at Eko Hotels and Suites, Lagos.