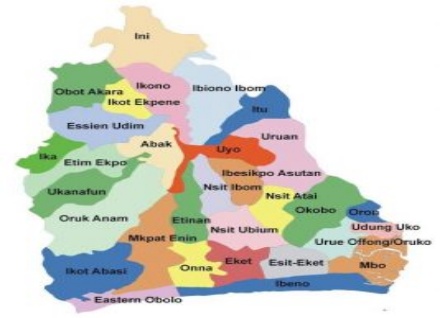 Akwa Ibom State was created on December 23, 1987 by General Ibrahim Badamasi Babangida after he carved out a portion of the old Cross River State to birth this current State which prides itself as the largest producer of oil and gas in the country, and her capital city is Uyo.

Akwa Ibom is a coastal State which is situated in southern Nigeria, lying between latitudes 4°32′N and 5°33′N, and longitudes 7°25′E and 8°25′E. The State, along with Cross River, Rivers, Bayelsa, Delta and Edo States, form part of the the South-South Geopolitical Zone. To the east, it shares its border with Cross River State, to the west, it shares its border with Rivers State and Abia State, and on the south it is bordered by the Atlantic Ocean and the southernmost tip of Cross River State.

There are thirty-one (31) Local Government Areas in Akwa Ibom State and they’re listed below.

ALSO READ:  Looking Ahead In 2022: What New Revenue Streams Can Nigeria Look To

With Uyo being the largest and major city in the state, there are some towns however, which hold great importance as well in the State. In no particular order, these major towns/cities in Akwa Ibom State include:

Akwa Ibom State is located in the southern part of our beloved country, Nigeria. It spans a total area of 6,900 square kilometres. The state is bordered on the east by Cross River State, on the west by Rivers State and Abia State, and on the south by the Atlantic Ocean. Akwa Ibom is a predominantly Ibibio, Anang and Eket speaking state.

Akwa Ibom State is a tourist destination and it boasts a good number of tourist sites and they are listed below.

Past and Present Governors of Akwa Ibom State

Since her creation in 1987, Akwa Ibom has been ruled by both military and civilian governors. All together, there have been ten (10) governors who have ruled the state till date and they are listed below.