This is the Biography of Major-General Johnson Thomas Umunnakwe Aguiyi-Ironsi, first military Head of State of Nigeria. Aguiyi-Ironsi was born on May 3, 1924 and he died on May 29, 1966. He was a senior Nigerian military officer and he seized power in the ensuing chaos following the May 15 1966 military coup, serving as the Head of State of Nigeria from May 16, 1966 until his murder on May 29, 1966 by a group of mutinous Northern army soldiers who revolted against his government in what was popularly called the May Counter Coup.

Thomas Umunnakwe Aguiyi-Ironsi was born on May 3, 1924 to Ezeugo Aguiyi in Umuahia-Ibeku, in present-day Abia State, Nigeria. At age eight, he moved in with his elder sister Anyamma, who was married to Theophilius Johnson, a Sierra Leonean diplomat in Umuahia. Thomas Aguiyi-Ironsi then took the last name of his brother-in-law as his first name, and he saw his brother-in-law as a father figure. At 18 years, Aguiyi-Ironsi joined the Nigerian Army as opposed to the wishes of his elder sister Anyamma.

Johnson Thomas Umunnakwe Aguiyi-Ironsi had his primary and secondary school education in Umuahia and in Kano.

Aguiyi-Ironsi joined the Nigerian Army in 1942, at the rank of a private with the seventh battalion. In 1946, he was promoted to the rank of company sergeant major. Still in 1946, Ironsi was sent on a training course in Staff College, Camberley, England. After successful completion of his course at Camberley, England, Ironsi was promoted second lieutenant of Royal West African Frontier Force in 1949.

Ironsi rose to the rank of Captain in 1953 and his rapid rise in the Army continued when two years later, in 1955, he was promoted to Major. Ironsi served in company of other military men as Queen Elizabeth II of the United Kingdom and Nigeria’s equerry at the time she visited Nigeria in 1956.

In 1960, Aguiyi-Ironsi was made commandant of the fifth battalion in Kano, Nigeria, with the rank of lieutenant colonel. Later in 1960, he was head of the Nigerian contingent force of the United Nation peace keeping force in the Zaire (now Democratic Republic of Congo). From 1961-1962, Aguiyi-Ironsi served as the military attaché to the Nigeria High Commission in London United Kingdom. It was during this period that he was promoted to the rank of Brigadier-General. During Ironsi’s tenure as military attaché he attended some courses at the Imperial Defence college (renamed Royal College of Defence Studies in 1970), Seaford House, Belgrave Square.

Ironsi was appointed as the commandant of the entire United Nations peace keeping forces in Zaire (Congo DRC) in 1964.

Aguiyi-Ironsi Head of State and Death 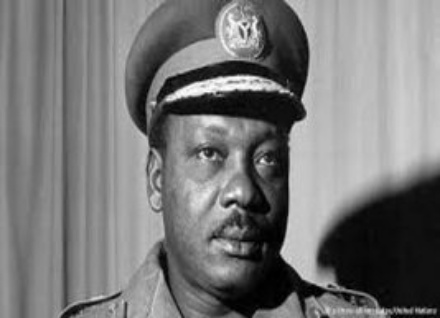 In May 1966, a group of army officers, led by Major Chukwuma Nzeogwu, overthrew the central and regional governments of Nigeria, killed the prime minister, and tried to take control of the government in a failed coup d’état. Nzeogwu was countered, captured and imprisoned by major general Johnson Aguiyi-Ironsi.

Aguiyi-Ironsi was named military head of state of Nigeria on May 17, 1966, a position he held until May 29, 1966, when a group of northern army officers revolted against the government, and killed Aguiyi-Ironsi. Ironsi only lasted 194 days in office before his life was cut short. His remains was later found in a forest in Ibadan and given a proper burial befitting of a General.