Agriculture in Nigeria is very important, employing about 30% of the Nigerian population. While there’s some form of modernization in this sector, the majority of the people engaged in agriculture production in all states of Nigeria practice it at a subsistence level.

Yet, Nigeria is a major producer of some agricultural crops in the world. This is as a result of the diverse cash crop supporting soil and climate with which Nigeria is blessed with. 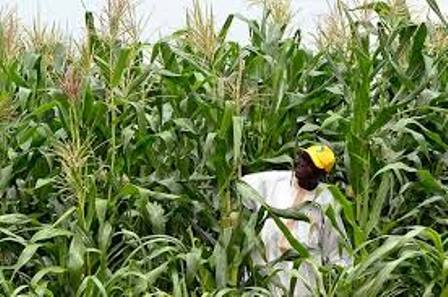 The major agricultural crops in Nigeria are twenty in number. These include both the food crops as well as the cash crops and each will be discussed below alongside the states they are produced in Nigeria.

Guinea Corn also known Sorghum is one of the major agricultural food crops grown in Nigeria.

According to the UN Food and Agriculture Organization (FAO), Nigeria is the second major producer of Sorghum in the world after the United States. In the 2012/2013 season, about 5.9 million tons of Guinea Corn was produced in Nigeria.

The major states producing Sorghum are located in the Northern part of the country. These states include: Borno, Kano, Kaduna, Niger, Zamfara, Katsina and Bauchi.

Millet is one of the most cultivated food crops in Northern Nigeria. In 1990, Nigeria produced about 5.1 million tons of Millet, making it the third leading producer of Millet in the world.

Coming to 2014, the number has reduced drastically as Nigeria was only producing 1.3 million tons, making them slip down the ranking to the fifth position.

The importance of Maize in Nigeria cannot be over emphasized. It is either cooked, roasted or processed into variety of foods.

Nigeria is said to be the largest producer of Maize in Africa and third largest in the world after the United States and Mexico. Nigeria accounts for 7.7% of the total Maize production in the world.

This cereal crop is produced in virtually all the states of the federation.

The leading producers however are Kaduna, Niger, Taraba, Plateau and Adamawa states respectively.

The list of food crops cultivated in Nigeria will not be complete without rice. This cereal is one of the most loved and cherished food crop in Nigeria.

Interestingly, Nigeria is the largest producer of rice in West Africa. On the other hand, the amount cultivated by the Nigerian farmers cannot meet the local demand. Thus, leading to it importation.

Virtually, rice is cultivated in all the states in Nigeria.

However, the main areas of rice cultivation in the country include the middle belt and Northern states of Benue, Borno, Kaduna, Kano, Niger and Taraba. Rice is also grown in the South Eastern states of Enugu, Cross River and Ebonyi.

This legume crop is one of the major agricultural crops Nigeria is known for.

Nigeria is said to be the largest producer and consumer of beans in the world, producing 2.2 million metric tons of dried grain in 2010.

Next on the list is Yam. It is the favorite of many because of the famous ‘pound yam’ and other delicacies prepared for it. Yam is cultivated in large quantities in Nigeria.

In fact, data made available by the UN Food and Agricultural Organization (FAO) shows that Nigeria is the world’s largest producer of yam.

In 1985, Nigeria produced 18.3 million tonnes of yam. This number increased to 32.318 million metric tonnes, making it still retains its spot as the largest producer.

The popular staple food Garri (cassava flakes or whatever you call it) is made from cassava.

This agricultural tuber crop is so popular in Nigeria that hardly would you hear or even see someone that have not come in contact with it or even heard of it. Interestingly, Nigeria is the largest producer of it.

Cocoyam is one of the major root tubers produced in large quantities in Nigeria.

In fact, the largest producer of cocoyam in the world today is Nigeria. Cocoyam is grown/cultivated in almost all the states of the country.

The list of food crops in Nigeria is not complete without sweet potatoes. This agricultural tuber had won the heart of many across the age groups Nigeria has.

The cash crop is grown majorly in the agricultural Northern states of Nigeria like Kaduna, Bauchi, Sokoto, Benue, Plateau and Kano.

Sweet potatoes are also grown in substantial amount in Anambra. Other states also farm this crop.

Groundnut (Peanut) is one crop in Nigeria that its importance cannot be overemphasized, it is classified both as a grain legume and an oil crop.

Nigeria is the world’s third largest producer of groundnut in the world, directly behind China and the United States. In 2014, Nigeria produced about 3.4 million tonnes of groundnut.

The states responsible for this production of groundnut in Nigeria are the northern states in Nigeria, they include Niger, Kano, Jigawa, Zamfara,Kebbi, Sokoto, Katsina, Kaduna, Adamawa, Yobe, Borno, Taraba, Plateau, Nasarawa, Bauchi, and Gombe States.

Nigeria is the third producers of sesame in Nigeria, directly behind India and China. A large proportion of this crop produced is shipped out of the country.

17 states and the FCT in Nigeria are the main producers in the country. These states include: Adamawa, Bauchi, Benue, Borno, Gombe, Jigawa, Kaduna, Kano, Katsina, Kebbi, Kogi, Nasarawa, Niger, Plateau, Sokoto, Taraba, Yobe and Abuja with Nasara being the largest producer of Sesame in Nigeria producing about 40 metric tonnes in a year.

Soybean was first introduced to Ibadan, Oyo State, Nigeria in 1908. Currently, Nigeria is the largest producer of the crop for human and livestock feeds in West and Central Africa.

Soya beans are mostly produced in the middle belt with Benue state accounting for over 70% of the production in Nigeria.

Cocoa is another cash crops in Nigeria that is very popular and it is the leading agricultural export of Nigeria.

This crop was introduced into Nigeria in the 1870s and tried in the Niger Delta area of Bonny and Calabar.

However, this important agricultural crop didn’t do well there. In the 1880s, it was introduced into the western Yoruba dominated region and today, they produce over 80% of cocoa in the world.

Currently, Nigeria is the 4th largest cocoa producing country in the world, after Ivory Coast, Indonesia and Ghana.

However, it is the third largest exporter in the world. Before the period of oil exploration, Nigeria was world’s second producer of cocoa. However, due to the discovery of oil, the production of this important cash crop in Nigeria had reduced.

This is a very important tree crop in Nigeria; the country is the 9th producer of rubber in the world.

Before 1934, Nigeria was the largest oil palm producer in the world. However, Nigeria is now the 3rd largest producer of this crop, after Indonesia and Malaysia.

In Nigeria, the Niger Delta states account for about 57% of the country’s oil palm production. Aside this region, it is also produced in the South East and North Central.

Cotton as a major cash crop is of considerable social and economic importance to Nigeria Cotton/textile activities widespread in the country.

Cotton production in Nigeria dates back to 1903 with the British Cotton Growers Association taking the lead until 1974. The traditional cotton growing areas are concentrated in Northern and South Western Nigeria.

States where cotton are grown in the Savannah belts of the country include: Kaduna, Ondo, Kano, Katsina ,Oyo, Kwara, Ogun Zamfara, Jigawa, Sokoto and Kebbi.

Sugar cane production is done mainly in the North Western region of the country with Kano State being the highest producer, accounting for 30% of the national production.

The border states of Kano, such as Jigawa, Kaduna and Kastina, represent respectively 8%, 13% and 13% of the domestic production.

Other sugarcane producing states in Nigeria are Taraba, Adamawa, Kebbi and Sokoto. The 8 states mentioned above represented 86% of the total production in 2009-2010.

This is one crop in Nigeria that despite it is been frowned at, continue to prosper.

According to the British American Tobacco Company in Nigeria, the volume of tobacco produced has increased from 2,088 tons in 2004 to over 2,500 tons in 2013.

About 10,000 people are currently directly involved in our tobacco growing operation.

The list of cash crops in Nigeria is not complete without cashew in it, it is one of the most popular and sort after fruit in the country.

In 2013, Nigeria produced about 950,000 metric tonnes of cashew, making it rank as the world 2nd largest producer of cashew.

The plant’s fruit and nut are both edible. Aside this, the nut is an essential export commodity in the country.