In this post, we give a brief history of Adamawa State, her local governments, her economy, her past and present governors and the natural resources found, major towns in the State and the notable universities and tertiary institutions in this north-eastern State of our country, Nigeria. 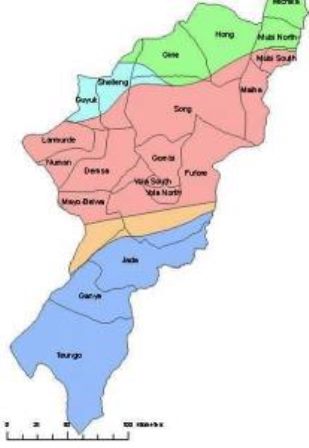 Formerly known as Gongola State, Adamawa, is situated in north-eastern Nigeria. Its main city is Yola, which has effectively served as its capital city since November 27, 1991 when Taraba State was carved out from the defunct Gongola State, subsequently leading to the renaming of Gongola State to Adamawa State. The State has four administrative divisions namely: Adamawa, Ganye, Mubi and Numan.

Adamawa State covers about 36,917 square kilometres, thus making it one of the largest states in Nigeria. It shares land bothers with Borno State to the northwest, Gombe State to the west and Taraba State to the southwest. Towards the east, the State forms the national eastern border with Cameroon.

The vast area where Adamawa occupies is a mountainous land which is crossed by large river valleys. The river valleys found in Adamawa are: Benue, Gongola and Yedsarem. Other valleys which are part of the north-eastern State’s landscape include the valleys of Mount Cameroon, Mandara Mountains and Adamawa Plateau.

Adamawa State, like most other States in Northern Nigeria, takes much pride in farming, which is the major occupation of the people. This is very obvious as can be reflected in their two notable vegetational zones, the Sub-Sudan and Northern Guinea Savannah zones. Cash crops found in Adamawa include cotton and groundnuts, while food crops found in the State include cassava, maize, yam, rice, guinea corn and millet.

The Emirs of Adamawa State have a long line of succession that can be traced all the way back to 1809 when the first ruler, Modibbo Adama, after which the State was named, was in power. The list of Emirs of Adamawa includes the following:

There are twenty-one (21) Local Government Areas in Adamawa State and they are listed below.

With Yola being the largest and major city in the state, there are some towns however, which hold great importance as well.

In no particular order, these major towns in Adamawa State include: Gombi, Jimeta, Mubi and Michika.

There are various ethnic groups in Adamawa state and they include:

Adamawa State is home to some of the country’s good universities and tertiary institutions of higher learning. They include the following:

Adamawa State has a total area of 39,742.12 square kilometres. The State is generally characterized by many rivers; the major one is the River Benue whose source is from the highlands of the Cameroon and flows southwards to join the River Niger.

Another river of great importance to the Adamawa people is the river Gongola. Adamawa is a predominantly Hausa speaking state.

Adamawa state is a tourist destination with some very interesting sites of interest. The state boasts a good number of sites that can generste seriius revenue to the state government should tourism be taken to the next level. These sites are listed below.

Past and Present Governors of Adamawa State

Since her creation in 1991, the state has been ruled by both military and civilian governors. All together, there have been twelve (12) governors who have ruled Adamawa state till date and they are listed below.