Different types of courts exists in Nigeria with their functions. These courts are stratified i.e. they exist in layers of superiority and this comes with some implication. In normal legal parlance, judges, justices, attorneys, barristers, lawyers, magistrates are some popular positions you hear in the Nigerian judicial system.

You can’t appeal a case dealt with at the supreme court at the appeal court. However, it can be done the other way round. This is because the supreme court is at a high level of ranking. Nigerian courts functions as the last hope of man to seek justice and each of the eight types of courts in the country have their specific functions.

The hierarchy of these courts are dully explained in this write-up and they form the judicial arm of government. The executive and legislative arm do not interfere in the activities of the Judiciary, that’s why there is a clear separation of powers as entrenched in the Nigerian constitution.

Below are the 8 hierarchy of courts in Nigeria explained with their various jurisdictions and functions:

The apex or number one court in Nigeria is the Supreme Court of Nigeria. Its jurisdiction is the highest and most important in the country. This means that no appeal can be heard regarding matters decided by the supreme court before any other Nigerian court.

It is currently located in Abuja and consists of the Chief Justice of Nigeria and 21 judges at all times. Normally, its on the recommendation of the National Judicial Council (NJC) that the Justices of the Supreme court is appointed by the President, once approved by the Senate. Every Justice of the supreme court is mandated to resign at the age of 70.

Functions of Supreme Court in Nigeria

Below are the roles of Nigeria’s supreme court:

According to the hierarchy of courts in Nigeria, after the supreme court is the court of appeal which has the original jurisdiction to determine and hear any question as to whether any person has been validly voted into the office of the President, Vice President, Governor or Deputy Governor.

Although, the court of appeal doesn’t try issues, its jurisdiction isn’t limited to election matters alone. It also appeal all other courts below it and any other tribunal. It is led by the President of the Court of Appeal, and comprises of 66 judges at all times as approved by the Senate. Unlike the Supreme Court, this one is located in different states of the country and they are 72 appeal courts in Nigeria.

Functions of Court of Appeal in Nigeria

The roles of the appeal court include:

The Federal High Court is the third in rank according to the hierarchy of courts in Nigeria. Headed by the Chief Judge and contains the number of Judges allowed may be preassigned by an Act of the National Assembly. Its jurisdiction is mostly limited to civil cases such as matters on taxation, banking,  custom and excise duties, citizenship, copyright, etc

However, it can be properly constituted if it contains at least one Judge of the Court. It has original jurisdiction in civil cases, and matters as set out under Section 251 (1) of the 1999 Constitution. It can be found in more than 15 states in the country.

Function of the Federal High Court in Nigeria

Below are the role of the Federal High Court:

The Section 255 of the 1999 Constitution provides for the provision of a High Court in each of the states in Nigeria and the FCT. Each of these courts are headed by a chief judge.

While the number of judges is determined by the State House of Assembly and the National Assembly in the case of the High Court of the FCT.

It has the largest jurisdiction under the 1999 Constitution in civil and criminal cases and has the appellant jurisdiction over decisions of Customary Courts, Area Courts, Magistrate Courts, etc.

Established in 1976, it has all the powers of the High Court of a state and the appellate jurisdiction. Below are the duties of the NICN.

Functions of the National Industrial Court

The Sharia Court of Appeal

The Sharia Court of Appeal is another type of court in Nigeria that is found in the Northern region of the country. It is prevalent in states where Sharia is practiced and these states include: Zamfara, Kano, Sokoto, Katsina, Bauchi, Borno, Jigawa, Kebbi, and Yobe states respectively.

The sharia court of appeal appellate jurisdiction in civil cases involving issues of the Islamic personal law. It is headed by a Grand Kadi and contain a number of Kadis. One is located in Abuja and this kind of court can be found in states that claim them.

Functions of Sharia Court of Appeal

The Customary Court of Appeal

There’s a customary court in the FCT and then in states that claim them. These types of courts are headed by the President of the Customary Court of Appeal and contain Judges.

They exercise the supervisory and appellate jurisdiction in civil cases involving issues of the customary law.

The Magistrate Courts and District Courts

These courts are established by the law of the House of Assembly of a State. The magistrate courts functions as a court of summary judgment as grounds are defined in this court without briefs or pleadings filed by the parties.

Below is a diagram of the hierarchy of courts in Nigeria 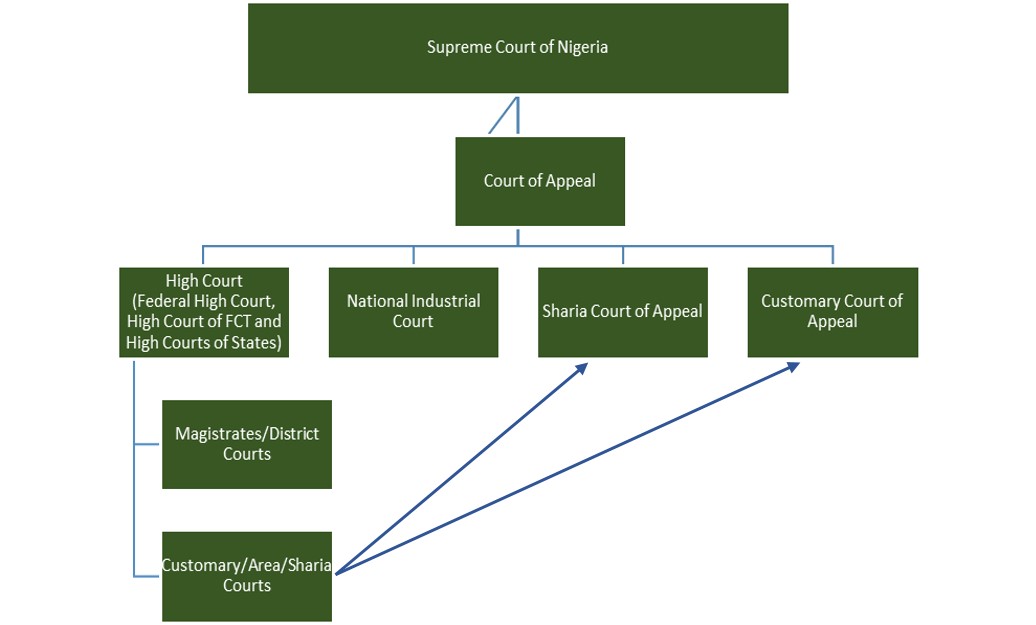